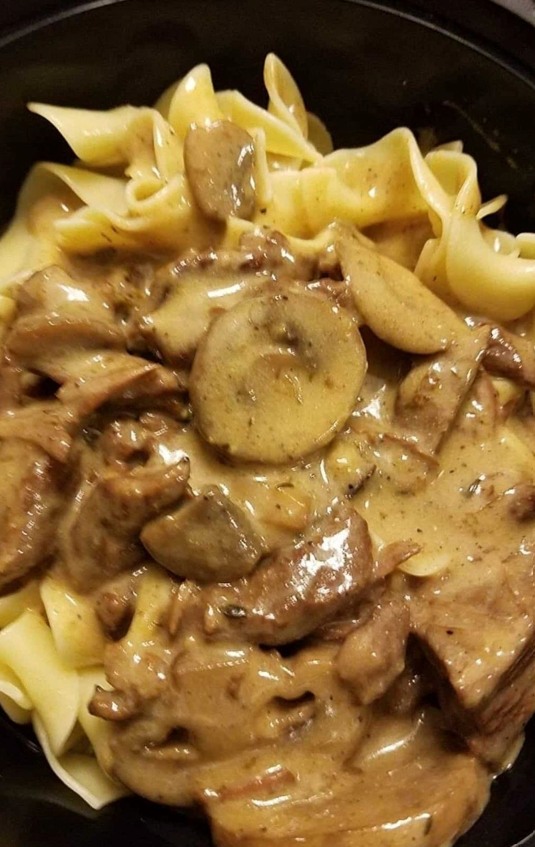 *ingredients:
° 1 pound of cooked beef
° 1 1/2 cups mushrooms
° 1 large onion, chopped
° ½ cup low-sodium beef broth
° Half a cup of flour
° Half a teaspoon of garlic powder
° Half a teaspoon pepper
° Half a teaspoon of paprika
° Half a teaspoon of salt
° 2 tablespoons butter
° 2 tablespoons vegetable oil
° 3 sprigs fresh thyme
° Sauce:
° Half a cup of sour cream
° 1 jar of beef broth
° 2 teaspoons cornstarch
* else:
° 8 ounces dry egg noodles
° 1 tablespoon parsley
* instructions;
The first step:
Preheat oven to 300*
In a large bowl, mix flour and spices
The second step:
Remove the fat from the meat pieces and lightly mix into the flour mixture
Heat the butter and oil in a large frying pan
Third step:
Add the floured beef and fry until a crispy layer forms
In a 9×13 baking dish, add the beef, onion, mushrooms, thyme and broth
The fourth step:
Cover with tin foil and bake for 2 hours, until beef is done with a fork
Next, mix the sour cream, broth, and cornstarch in a bowl and set aside
Fifth step:
Cook the noodles for 2 minutes less than the time suggested on the package
Remove meat from oven and heat to 350*
Sixth step:
Remove thyme sprigs from pan and add egg noodles and stock mixture.
Bake for 15 minutes, until hot and fluffy
Enjoy ! 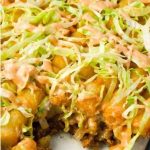